Membership is not required to access these commercial sailing offers 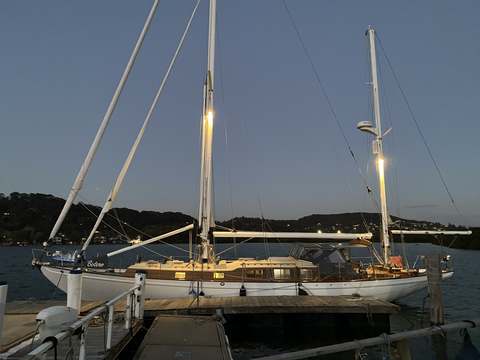 THE JOURNEY
1) With an ETD of February 2022 we will sail up the East Coast of Australia to Darwin then north through the Indonesian archipelago to Singapore and on to Phuket in Thailand.
2) From Thailand we sail west to the Nicobar Islands and on to Sir Lanka and up to Kochin on the west coast of India.
3) From Kochin north to Abu Dhabi then through the Suez canal to the island of Skopelos in Greece.
Although the duration of this journey is not critical I would hope to arrive at our destination at the end of the northern summer in September 2022.

THE YACHT:- Bolero was built by Andy Engwirda of Tweed Heads, Gold Coast, Queensland, Australia. This centre board yawl was designed by John Alden (Margaree 1959) and her construction took place over a period of eleven years. She was launched in 1985.
Bolero is carvel-built of Huon planks over Celery Top Pine frames (both from Tasmania, Australia) and her backbone is Bluegum. The superstructure, deck and interior are all constructed from Burmese Golden Teak, hand-picked in Burma. All fastenings are from the USA. The centerboard casing and board, and bulk of the floors are constructed from silicon bronze. She has completed two circumnavigations and been sailed single handed around Australia.
Since acquiring her I have installed all new B&G Navionics, new sails, new Solar Panels, and had the Perkins and Onan engines fully serviced.