Sailing across the Atlantic - a classic blue water voyage 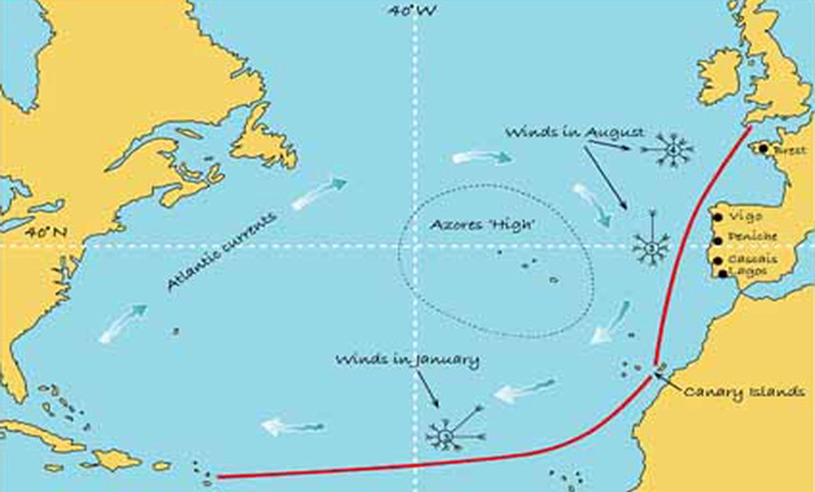 Despite its undeniably epic dimension, Andrew Simpson thinks the actual crossing isn’t as demanding as one might imagine - just head south till the butter melts!

Of course, you should have a fair degree of sailing competency, and your boat must be capable of making such a voyage, but that should come as no surprise. For many sailors it’s the contemplation of all that vastness that’s the intimidating factor. And needlessly so. Think of it in another context. Would you be more at risk mountain biking over deserted moorland than cycling to work through a crowded city? There are no prizes for the correct answer since this is obvious. The consequences of getting lost amongst the rocks and heather is more likely to be an embarrassment rather than a tragedy, whereas even a minor traffic accident can seriously spoil your day. The same principle applies to sailing. In a voyage, say, from the UK to the Caribbean, the most perilous stages will be within sight of land. It takes little reflection to realise that whatever comfort the land's proximity brings is an illusion. It’s the likelihood of underwater hazards and other vessels that poses by far the most sinister threat. During an 18 day voyage from Madeira to St Kitts I didn't see a single ship. The truth is that, in all but the most terrible conditions, the open sea is relatively benign – safer by far than crowded coastal waters. Assuming we choose the right timing and route, that is.

The Atlantic – by which, being British, I mean the North Atlantic, the expanse of water north of the equator – is roughly 3500nm (nautical miles) wide at its maximum. It’s fringed to the east by Europe and north-western Africa, and to the west by the Americas, north and south. And, at just below its widest point lie the West Indies, a string of islands that play guardians to the Caribbean and are a renowned magnet for sailors of every persuasion. They are also the most popular landfall for boats sailing east to west – a voyage there from the Canary Islands being about 2,700nm.

But why go so far out of your way? After all, to get to the Canaries from the UK would involve a trip of 1400nm, bringing the whole transatlantic journey up to a daunting 4000nm. When Newfoundland lies just half the distance to the west, where’s the sense in that? Hmmm… well actually it’s very sensible indeed. To explain why, I have to conform to a national characteristic and talk about the weather – by which I mean weather on a global scale. You see, the North Atlantic basin is dominated by an area of high atmospheric pressure parked approximately slap in the centre. In Europe we know it as the ‘Azores High’ but if drifts back west towards Bermuda, in the minds of some it becomes the ‘Bermuda High’ – logical, I suppose, if a mite territorial. However you label it, it’s pretty much a permanent feature, rarely likely to wander far. And its influence is profound. We humans tend to think of winds as surface phenomena whereas they are very much three-dimensional in nature. Put very simply, hot air rises in warmer tropical regions, cools at high altitude, then falls again as it meets the colder air nearer the poles. This churning of the atmosphere drives what we know as wind.

To describe what happens next we need to acknowledge the 19th Century physicist Gaspard de Coriolis who lent his name to the ‘coriolis effect’ ­– the workings of which he was the first to explain. It’s all to do with the Earth’s rotation. To be brief, the coriolis effect determines the way the prevailing winds circulate around ‘anticyclones’ – areas of high atmospheric pressure – namely, always in a clockwise rotational direction in the northern hemisphere and anti-clockwise south of the equator.

But that’s not all. The surface drag between these prevailing winds and the waters over which they blow sets up ocean currents that flow in the same direction. In short, the whole system becomes a giant carousel of wind and water rotating majestically around the Azores/Bermuda High. This means that inhabitants of the UK can expect predominantly westerly winds, the Portuguese will see northerlies, sailors sailing westbound towards the Caribbean will enjoy easterlies and those on the Atlantic coast of the United States will be very familiar with southerlies.Mariners have known this for centuries and are well accustomed to harnessing these forces to their advantage.

The trade winds are called trade winds because they were used by early traders. Their experiences sailing across the Atlantic and other oceans are well recorded and we are the beneficiaries. So, let’s imagine a sailboat planning to explore both the US eastern seaboard and the Caribbean. How might the skipper plan his or her itinerary? Logic might seem to indicate that they should set the much shorter course directly for Newfoundland and then head southwards down the US eastern seaboard, eventually to the West Indies. Unfortunately, this would have them battling both headwinds and current every inch of the way – an unquestionably wretched experience­, uncomfortable for the crew and with a very real possibility of damage to the boat. No, the skipper concludes. Better by far to heed the voices from the past and hitch a ride on that convenient carousel, allowing it to carry them around in style.

Which leaves the question of when. And this is very important. Late summer heralds a rumbustious time in the North Atlantic. Spawned by the seasonal heat, deadly hurricanes brew in the lower latitudes. This is no place for a small boat at that time, no way! Even further north, smaller but still significant depressions curve in from the west – sometimes the tails of earlier tropical storms. It’s not until late November, with the heat diminishing in the northern hemisphere, that things really calm down and become more predictable. By which time it’s getting cold in the UK and the daylight hours are short. Visibility can be poor. This is not a time for pleasurable sailing in these latitudes. Musing on this, our skipper searched for a better plan. And found one...

The eventual decision involved leaving British waters in June and spending a leisurely summer exploring the French, Spanish and Portuguese coasts – fascinating cruising, I can promise you. Next comes the first longish leg from Portugal to Madeira (470nm) or the Canaries (570nm) or, if minded to, they could visit them both in sequence.Wherever or for how long they linger, they will try and get to the Canaries by October. This should give them a couple of months to get some well-earned rest, square away their boat, get the provisions properly stowed, and generally prepare for the great adventure.

And the navigation? Well, these days GPS makes that a cinch. When I crossed the Atlantic in 1974, I relied on a sextant and sight reduction tables. Today, I only have to glance at my chart plotter. But what if the gizmos fail? Luckily, the ancients had advice for that as well: “Head south 'til the butter melts, then turn right. ”I really couldn’t have put it better myself. It doesn’t call for precision. The Americas are very hard to miss – even if you do have to ask someone where you are when you get there.

The eastbound crossing depends very much on your departure point. From the Caribbean, the popular choice is to sail north to Bermuda and then across to the Azores and onward to your European destination. However, this strategy exposes you to the persistent calms you may find when you enter the anticyclone, so make sure you have plenty of provisions and fuel. If starting further north – Chesapeake Bay and above let's say – it's best to stick to the higher latitudes, thus taking advantage of both the Gulf Stream and prevailing westerlies. Either way, May through July are good months to cross but, whatever your route, expect the eastbound crossing to be more challenging than the trade wind sleigh-ride further south. As the first colonists found out, in the days before steamships it was a whole lot easier to get to the Americas than it was to get back. And in a sailboat it still is.

Captain or Captain and Stew/Cook