The Atlantic Ocean - from the Caribbean to Antarctica and the Arctic 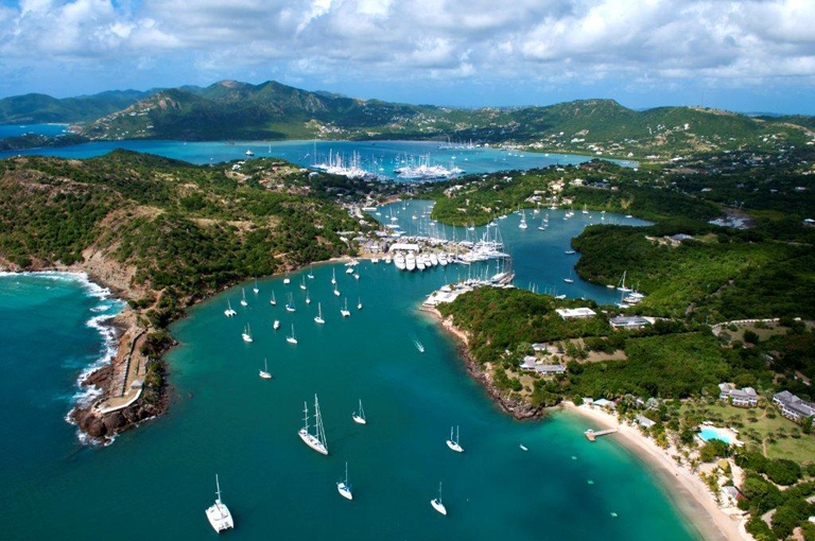 For boats arriving in the Caribbean from the east, the preferred landfalls are Saint Lucia, Antigua and Barbados, while most French yachts make for Martinique or Guadeloupe. Over half the boats that arrive in the Caribbean from either Europe or America used to plan on spending at least one season there, but in recent years concerns over the economic situation as well as the effects of climate change have resulted in a significant increase in the number who prefer to limit themselves to a one year circuit, be it from Europe or North America. Those who decide to stay longer usually have their boat stored on land in a secure place during the hurricane season. The island of Trinidad has set up several boatyards for this purpose with 1367 boats spending the summer there in 2010, which shows a significant reduction from a peak of 2664 in 2000 and 1845 in 2006. This is explained by a gradual decline in the number of sailors who are prepared to keep their boats in the tropics during the hurricane season, which seems to be also the case in the Pacific.

The total number of boats that spend the winter season cruising in the Caribbean has remained stable in recent years but one country that has seen a significant increase is Cuba.

A total of 632 foreign flagged yachts, both sail and power, were recorded by the Cuban authorities to have called at their ports during 2010 but as several of them clear into more than one marina, the actual number of individual boats is closer to 250. Even so, this is a marked increase of more than one-third over the comparative figures for 2006 and points to a trend that is going to continue and quite likely will accelerate as relations with the USA are normalised. According to Commodore José Miguel Escrich of the Hemingway International Yacht Club of Cuba, ‘What is remarkable is the year by year increase of vessels from the USA with a total of 135 American yachts arriving at Cuban marinas in 2010 in spite of the interdiction of sailing to Cuba still being in force.’18,467 boats, both sailing and power, cleared into the Bahamas in 2010.

Many of the boats visiting the neighbouring Bahamas will undoubtedly welcome such a development which significantly increases their cruising range. According to Bahamas Customs, a total of 18,467 boats, both sailing and power, cleared into the country in 2010, with Bimini being the most active port with 6,871 arrivals. What is interesting is that contrary to the general belief that the Bahamas are a winter cruising destination in fact nearly half the entries were recorded in summer, the busiest months being May, June and July, with 2,878, 3,009 and 2,926 arrivals respectively. While warm water cruising has remained generally stable on a global level over the last decade, cold water sailing is becoming more popular as sailors strike out for more challenging destinations. Two high latitude destinations that are now regularly visited by cruising yachts are Antarctica and Spitsbergen. In 2010 a total of 32 yachts visited the Antarctic Peninsula which shows the number of visiting yachts having remained very stable compared to 30 in 2006 and 31 in 2000, and the absence of an increase is probably due to the imposition of much stricter controls on the movement of vessels in order to protect that unique environment. To that figure should be added the 16 sailing yachts engaged in charter work, some of which make more than one round trip between the mainland and Antarctica every season.

While the number of yachts sailing to Antarctica appears to be unchanged, the total number passing through Ushuaia has gone down slightly. This busy Argentinian port at the tip of South America is where boats planning to sail south to Antarctica or north to the Chilean Canals prepare and provision for their voyage. The 83 arrivals in 2010 compare to 90 in 2006 and 105 in 2000.

Across the Beagle Channel from Ushuaia is Puerto Williams, a Chilean military outpost and the southernmost settlement in the world. The small port is only a short distance from Cape Horn and as the Chilean authorities claim sovereignty over a wedge that includes both Horn Island and the Antarctic Peninsula, any boats planning to sail that way must complete formalities here. The movements of all vessels are monitored by the Chilean Navy and show that 2010 was a busy year with a total of 505 yacht movements. Besides the 31 yachts going to Antarctica, the statistics also shows that 40 yachts left from Puerto Williams to cruise the Chilean Canals, with an additional 20 arriving from there bound for the South Atlantic. There was also much more traffic along the so-called Cape Horn circuit, with 90 boats leaving from Puerto Williams to round that symbolic landmark.

Most yachts heading north from Tierra del Fuego and the Beagle Channel call at Port Stanley in the Falklands, which saw 37 yachts in 2010, a small but steady increase over the 30 in 2006 and 22 in 2000. From there, the routes diverge and either follow the contour of the South American mainland or sail nonstop to St Helena or Cape Town. On the latter route, the remote island of Tristan da Cunha is a convenient port of call for some of those boats and saw a record number of 12 visitors in 2010 compared to the previous bumper year of eight visiting yachts in 2000.

Compared to Antarctica, at the other extreme of the Atlantic Ocean, the number of visiting yachts reported from Spitsbergen shows a significant increase with 66 arrivals in 2010, compared to 37 in 2006, 10 in 2000 and only four in 1990. The number of cruising boats attracted to high latitude destinations in the North Atlantic is certainly increasing, with more arrivals reported from both Iceland and Greenland.

Even the Northwest Passage is now regularly transited by yachts, which has grown from a trickle to a steady two-way traffic. It took over seventy years after Roald Amundsen’s first transit in 1903 – 1906 for another yacht to achieve that feat when the single hander Willy de Roos managed to complete the transit in one season in 1977. Other yachts followed and, after a record number of seven transits in 2008, ten transits were completed in 2009 and seven in 2010.

That year also saw two transits through the even more difficult and less travelled Northeast Passage. Only seven yachts have managed to transit that difficult passage north of Russia since Eric Brossier’s first successful transit on Vagabond in 2002 as the first yacht to conquer the Northeast Passage in one season and without any outside assistance. Eric went on to complete a circumnavigation of the Arctic by way of the Northwest Passage thus becoming the first sailor to have achieved this remarkable feat.

The Pacific Ocean (Panama to Tahiti)