The Pacific Ocean - Panama to Tahiti 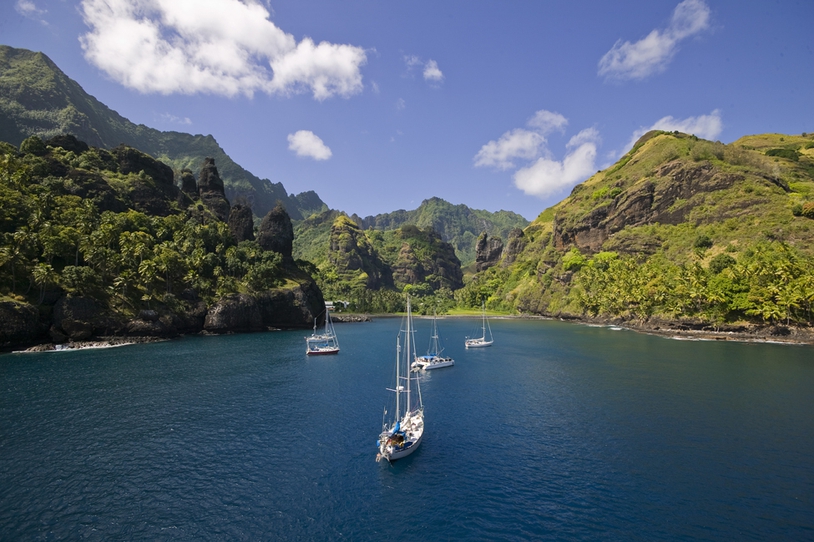 Part 2: The Atlantic Ocean (The Caribbean to Antarctica and the Arctic)

The Panama Canal continues to be a valuable indicator of yacht movement both between the Atlantic and Pacific and on a global level. The Canal is working at full capacity and so the peak transit time for yachts is in February and March when waiting time on the Caribbean side can be two weeks or longer unless speeded up by using a local agent. The number of transits shows an increase compared to 2000, with a total of 1177 transits in 2010 compared to 790 ten years earlier. The proportion between the two directions has remained unchanged at an approximate ratio of 2 to 1, with 771 boats bound for the Pacific and 406 for the Caribbean in 2010 compared to 532 and 258 in 2010.

Also largely unchanged are the Pacific destinations after the transit, with about two-thirds of the boats turning north, towards the west coast of Central and North America, and the rest turning left for the South Pacific. Although the majority among the latter took the classic route to Galapagos, about one-third sailed first to the South American mainland. Puerto Lucia marina in La Libertad, in mainland Ecuador, is a favourite landfall where 71 arrivals were logged in 2010, exactly the same number as during 2006. The small marina is a convenient and safe place to leave the boat while exploring the interior of Ecuador, with the High Andes and Amazonia within easy reach.

The restrictions applied to visiting yachts in Galapagos are still in force but since the use of a local agent in dealing with formalities has become compulsory, entry formalities have been streamlined. Visiting yachts are now granted stays of up to twenty days by the port captains in the two official ports of entry: Baquerizo Moreno and Puerto Ayora. Compared to 180 yachts in 2000 and 120 in 2006, the number of cruising yachts has seen an unprecedented increase with a total of 395 boats having called at the Galapagos Islands in 2010. The comprehensive statistics obtained from the maritime authorities paint an interesting picture of current trends in the South Pacific. The largest national contingent was that of British yachts (92), followed by 72 American, 39 French, 30 Australian, 23 Canadian, 21 German, 18 Dutch, nine each from Switzerland and New Zealand, and a host of other nationalities. One tempting conclusion to draw compared to the statistics obtained from the Azores is that British yachts seem to have re-established their predominance on the global cruising scene, whereas French yachts continue to occupy that position in the North Atlantic and US boats in the Pacific.

The Galapagos statistics for 2010 also show that March continues to be the most popular time with 134 arrivals, compared to 52 in February, 85 in April and 47 in May, the figures slowly tapering off to only three in October. With April being the best time to arrive in the Marquesas, at the start of the safe season, the situation is not going to change significantly in the near future, so those planning to arrive in Galapagos in March should expect to find a crowded place as the anchorages in both Baquerizo Moreno and especially Puerto Ayora are mostly taken up by local excursion or fishing boats.

While the majority of yachts continue from Galapagos along the classic trade wind route to the Marquesas and Tahiti, every year a few boats make a detour to Easter Island and continue from there via Pitcairn Island to French Polynesia. They made up just over half of the 44 boats which called at Easter Island in 2010, the rest being boats en route to the Chilean Canals and South Atlantic. The peak arrival time is between January and April, with 30 arrivals recorded during that period.

The boats which transit the Panama Canal and head for the South Pacific are joined in the Marquesas and Tahiti by boats which have sailed from Mexico, USA or Canada. It is estimated that approximately 150 American and Canadian boats arrive every year in French Polynesia but that number has been slowly going down. Compared to the past when many of these boats continued on a circumnavigation of the world or at least sailed as far as New Zealand before turning around, close to about half of the North American boats now turn north from Tahiti. It is reckoned that about 80 boats sail the circuit from the US West Coast to Tahiti and Hawaii which some attempt to complete in one season.

Those who sail the longer loop to New Zealand return to Tahiti in June and continue to the mainland via Hawaii. Those who limit themselves to the shorter loop, sail north from Tahiti at the end of the safe season in the South Pacific and either spend the winter in Hawaii and sail home the following spring, or return to the South Pacific for another season of cruising. The number of arrivals in Tahiti is usually a good indication of the movement of cruising boats in the Pacific basin and the figures for 2010 supplied by the port authority of Tahiti show a steady increase in recent years, with 826 in 2010 compared to 694 in the previous year, 350 in 2006, and 442 in 2000. However, according to the Tahiti Yacht Club, the figures for 2010 may be misleading as they refer to all recorded arrivals and therefore also include boats which have visited Tahiti more than once. Based on the figures from destinations west of Fiji, the individual arrivals in Tahiti were probably closer to 600 still showing a significant increase over those recorded in 2000 which were also confirmed by the figures from Galapagos.